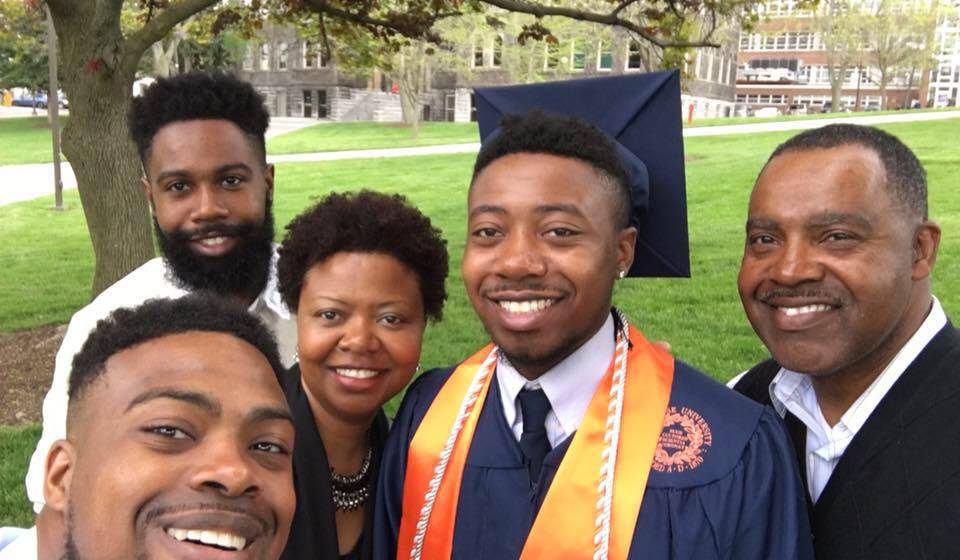 Aarick Knighton has what he calls, “the learning bug.”

When he’s bored, or has downtime, he’ll jump on YouTube or Wikipedia and spend hours diving headfirst into a new topic. His interests are wide-ranging, from how technology will change our world to the Yankees slow start to the season.

So when his friend, and fellow Say Yes Syracuse (Say Yes) alumnus, Liam Kirst, reached out and recommended him for a job with Mayor Ben Walsh’s reelection campaign, he saw it as a learning opportunity he couldn’t pass up.

“I had zero, zero, campaign experience at all so I had no clue why my friend thought of me for the position or why Mayor Walsh said yes,” Knighton said. “Come to find out, the mayor had been following along with my social media, my work and my career.”

“It was another Say Yes connection that made it happen, and that was just the beginning. It’s everywhere,” Knighton said. “Say Yes continues to change the trajectory of my life.”

Knighton always planned to go to college, but credits his Say Yes scholarship with “cracking open the door” to more options.

Knighton, a 2011 Corcoran High School alum, used his Say Yes scholarship to study Information Management and Technology at Syracuse University. After graduating, Knighton worked as a social media manager, first for Syracuse.com and later for Syracuse University, before jumping into the political arena this past spring. 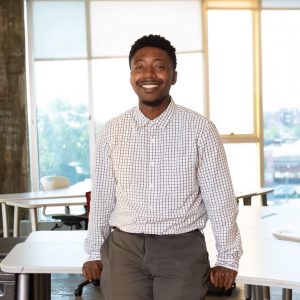 Knighton stands in a conference room at City Hall where he works as Mayor Ben Walsh’s campaign manager.

“The initial push that Say Yes gives is invaluable, it really is,” Knighton said. “A lot of the local students have the capabilities and the talents to succeed in college and beyond, but they don’t always have the resources or the opportunities to do so. Most people will take off running if you just give them the keys.”

Ahmeed Turner, Say Yes Syracuse’s Executive Director, explained that the foundation of Say Yes is rooted in the economic revitalization of Central New York. Its mission is to provide opportunities for young people to gain a meaningful career and to make a positive impact on the community. In July 2020, the Central New York Community Foundation joined forces with Say Yes to continue its support of local students.

“In my opinion, Aarick embodies all of what Say Yes stands for; he took advantage of the tuition guarantee, and he stayed here,” Turner said. “He’s always had this sense of civic responsibility and I think the scholarship emboldened him to be more active in the community.”

‘Get In Where You Fit In’

Knighton said his family always stressed the importance of giving back, and being active in the community.

“It’s just part of who I am. I don’t think of it as being that special,” Knighton said.

In February, after reading a Syracuse.com story about a local resident living without heat or water during the frigid winter, Knighton jumped to action, talking with local advocacy groups, and raising more than $600 dollars to help her find a new residence.

Knighton grew up in a middle-class family on the South Side, near the Valley, but said a lot of his family and friends weren’t as fortunate.

“It’s the system, you know, it’s not really anyone’s fault. You don’t get to pick where you live when you’re two months old,” Knighton said. “A lot of things are out of your control. If you have the ability to even change it a little bit for someone else—why not give up that one percent of whatever you make, or whatever time you have, to help someone else?”

Growing up, Knighton was actively involved in the community. He performed in church plays, worked on his local Juneteenth committee and participated in Valley Youth sports programs. These activities along with his family’s community involvement sparked his love for Syracuse and the people that call it home.

“Syracuse is such a cool city. There’s so many little pockets of people doing cool stuff, and you can just get in where you fit in and just take off running, which is what I really love about it,” Knighton said. “And Say Yes really actually started my appreciation for all of that when I got involved in high school.”

Knighton has stayed in contact with his Say Yes cohort over the years, and some of the members are planning their 10-year high school graduation reunion through Facebook. Through social media, he’s seen their successes in college and now in their professional careers.

He’s excited about the recently launched Believe in Syracuse mentorship program and to watch the Say Yes network continue to grow.

Knighton said Say Yes provided financial flexibility that he is still experiencing, five years after he graduated from Syracuse University.

“The financial relief—that one less payment a month, the thousands of dollars less in debt—it provides flexibility as we build our young lives, as we move, have families, establish careers,” Knighton said. “I am super grateful to Say Yes for that, and I know my classmates are, too.” 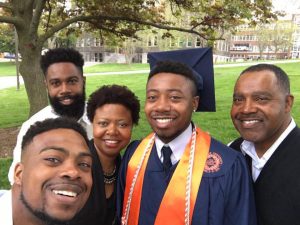 Knighton celebrated with family right after his graduation.