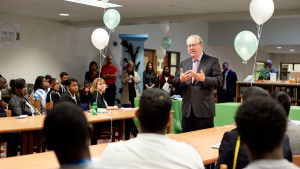 This story appears in the December 14, 2014 issue of Forbes.

In its current issue — which is devoted to education philanthropy, under the cover headline “Best in Class” — Forbes Magazine profiles George Weiss, who founded Say Yes to Education in 1987 and continues as its chairman.

The article, by Natalie Robehmed, describes Weiss — and Say Yes — as engaged in “one of the more interesting experiments in education right now,” namely: making available full tuition college scholarships to a community’s public high school graduates, as well as furnishing them with the supports intended to take full advantage of those opportunities. The article goes on to pose a fundamental question: “Can such a suite of interventions work if applied on a citywide basis?”

More than 5,300 students have gone off to college with the support of Say Yes — most in the last three years from the organization’s citywide chapters in the upstate New York cities of Syracuse and Buffalo.

The article quotes Weiss as saying: “I sometimes get up in the middle of the night because I still feel like I’m not doing enough.”

To read the full article in Forbes Magazine, go here.